What do blue jeans, golf clubs and a masonry saw have in common? They were all the subject of a Wall Street Journal feature on product design. In "Form & Function", they told the story of seven different products and how the design of each was influenced by a combination of scientific analysis, classic beauty and plain old common sense. 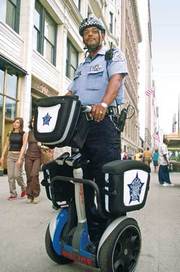 How did we develop our stereotypes about the design of everyday things? Typically it is because they worked well at what we asked them to do (or what we were told they do), so they were consequently admitted into the club of perpetual, time-tested stereotypes. For every iPod and Blackberry (the most recent examples of conceptual designs), there are hundreds of examples of relative failures. Recall the Segway; the strange contraption which was to revolutionize personal transportation. Aside from TSA agents in your local airport, the Segway has not been invited into the "Human Design & Usability Stereotype Club"/ Gianfranco Zaccai, the founder of Design Continuum  in Boston, comments in the WSJ feature that the Segway is "brilliant technology, but fundamentally didn’t consider an aspect of human nature". Lawrence Rout further comments that it is one thing to have a broad idea of what a product will be. It’s something else altogether to figure out how it will all be put together – what it’s actually going to look like.

David Lewis, a designer for Bang and Olufsen, stated that innovation is all about coming up with something that people have never thought of – shattering stereotypes about what common objects will look or perform like. Therefore, this cancels out the need for user testing or market research, because people won’t know what they don’t want (because it doesn’t exist in a form recognizable to them).

So what is all this doing in a blog about ergonomics and human performance?

As I read each of the seven stories, three of them jumped out at me as really interesting examples of probably the most fundamental design rule – know your user. Consider the following themes:

Sometimes, everyday products remind us of our constant mission to make the things, jobs, situations, etc. around us better. What is around your right now that you think can’t be improved upon?

Remember, in 1989 the commissioner of the US Patent Office infamously said "Everything that can be invented has been invented". How did that work out?

Did you know?
We have the latest research on ergonomics including videos, e-books, and articles. Check it out >
More posts in: Ergonomic Design

How to Pick a Chair for Your Home Office
Considering a Treadmill Desk? Read this First.
Q & A with Exoskeleton Expert Tom Sugar