I still remember the first time I heard the term presenteeism about 5 years ago and chuckled to myself because it was so true. Over the years, it’s been defined several different ways:

As reported in the April 2004 issue of The Journal of Occupational and Environmental Medicine, as much as 60 percent of the total cost of worker illness stems from "on-the-job productivity losses" — exceeding what companies spend on medical and disability benefits and sick days.

To conclude this post, I’ll leave you with Jessica Hagy’s sketch as it is a great representation of presenteeism. Note that the Y-axis (job satisfaction) is interchangeable with employee engagement, resources, and work conditions. 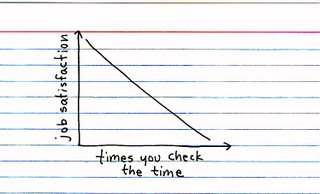 Did you know?
We have the latest research on ergonomics including videos, e-books, and articles. Check it out >
More posts in: Employee Engagement|Ergonomics

Q & A with Exoskeleton Expert Tom Sugar
Transform Any Room into an Office
Stay Home, Stay Safe, and Say Thanks to the Grocery-Store Cashier